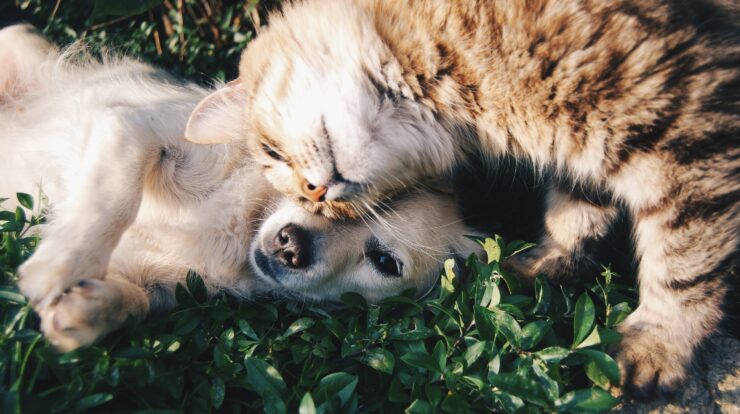 More and more people are using CBD oil to maintain their health and treat various conditions. The benefits of CBD oil stretch far and wide, and it’s especially getting a lot of buzz today because of its effectiveness in relieving stress and anxiety – conditions that are almost unavoidable in the modern world.

But the wonders of CBD oil shouldn’t be reserved for humans only. Not just humans, but all vertebrates have an endocannabinoid system (ECS) which fine-tunes numerous vital physiological functions and helps the body regain internal balance. So when pets ingest cannabinoids, the cannabinoids will interact with the ECS receptors (called CB1 and CB2 receptors) just like they do for humans. This supports a healthy ECS and triggers beneficial responses throughout the body, helping it fight various ailments.

If you have a furry friend whose health and wellbeing depends on you, you’ll want to know all about this. Here’s how you can use CBD oil to take care of your pet and help them live a happy, healthy life.

And just in case, we’ll get over with it right away: CBD is a compound that won’t get your pet high just like it won’t get you high – that’s THC.

Extensive research has been conducted to prove how cannabidiol can help people with PTSD, panic attacks, anxiety disorders and overall stress relief. Because other mammals respond to CBD via receptors the same way as we do, it’s no surprise that it has the same calming effects on pets.

Most pets, dogs especially, suffer from separation anxiety, which is something that leaves their owners worried and feeling guilty every time they leave the house. This is a real problem and we could never fathom the stress our pets experience when we leave them alone, but CBD oil can be used to help them feel calm and peaceful. Pets can also suffer from anxiety and phobias to various extents for different reasons, most often as a result of previous trauma, so CBD oil can be used as a cure for their condition in the same way it’s being used to treat people with PTSD.

Pets are often affected by various bacterial infections, and unfortunately, a lot of visits to the vet result in prescriptions for antibiotics. Synthetic antibiotics have numerous side effects, most notably disrupting the gastrointestinal system by killing the “good”, healthy bacteria along with the bad. Research has shown that all cannabinoids have antibiotic properties so CBD oil can be an equally effective but more healthy and gentle treatment for a pet’s bacterial infection.

Unfortunately, dogs are no stranger to epilepsy as well, and a fewer number of cats may experience seizures. Cannabinoids are now being used extensively to treat seizures in humans, as they’re proving to be more effective than any other kind of treatment. It’s no surprise to see that a lot of CBD oils for pets are now used as an alternative and efficient way to treat epilepsy and reduce or completely stop seizures, tics, tremors, and spasms.

The effect that cannabinoids and other substances found in hemp and cannabis have on treating tumors has been studied extensively, and it’s completely changing cancer treatment (for the better). Cannabidiol is known to kill cancer cells as it blocks their energy-producing abilities, and some studies show that CBD can even stop cancer cells from growing. Inarguably, CBD oil can be used not just to treat cancers and tumors in pets, but to prevent them from developing in the first place.

Studies have shown that cannabidiol (CBD) has the most analgesic and anti-inflammatory properties in comparison to other cannabinoids. That’s why CBD oil is often used to reduce inflammation and pain in injured cats and dogs, as well as for relieving chronic and intestinal inflammation. This helps with a wide variety of conditions, including inflammatory bowel disease. It’s a more healthy and natural alternative to painkillers and other drugs which can potentially harm a pet’s internal organs just like they do for humans.

Increasing appetite and helping with nausea

A healthy pet never has an appetite problem – far from it. But when something goes wrong or when they’re just healing from an injury, it’s heartbreaking for owners to watch their pet’s unusual disinterest in food. It’s our responsibility to keep them healthy and well-nourished so many owners resort to CBD oil for increasing their pet’s appetite when they’re injured or for treating vomiting and nausea, as it has the same effect it does on humans.

Lab research conducted on rats shows us that CBD and other cannabinoids have a neuroprotective effect. CBD is a powerful antioxidant that helps cells fight free radicals which have a degenerative effect on the entire system, and it has been used to treat Alzheimer’s and Parkinson’s disease. Thus CBD oil can be especially effective for ageing animals to protect their brain cells and keep the nervous system intact.

Overall, CBD oil is not only a powerful treatment for conditions your pet could be suffering from, but it’s also a great supplement to help healthy pets stay that way their entire life. The most important thing when choosing a CBD oil for your pet is to make sure that the product is natural and organic because any other form can contain pesticides and other chemicals you want to avoid. Then you’ll have to go through the usual shenanigans of slyly mixing it in their food – but they’ll have no idea once it’s in there. Here’s to healthy and thriving pets! How CBD Oil May Help Dogs With Cancer